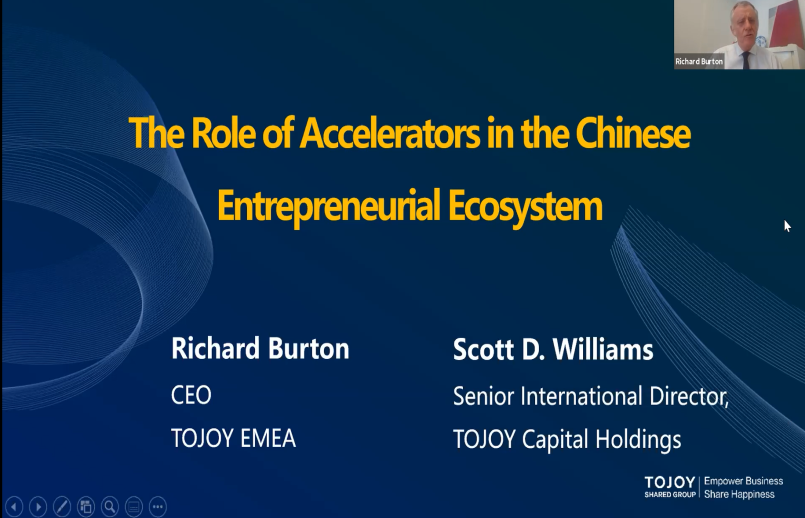 On June 14th the third session of INSMEAcademy on Building Entrepreneurial Ecosystems explored the role of accelerators in the Chinese entrepreneurial ecosystem with TOJOY, the largest Acceleration platform in China and INSME member. Richard Burton and Scott Douglas Williams, respectively CEO of TOJOY EMEA and Senior International Director at TOJOY Capital Holdings based in Shanghai, participated as speakers to the webinar, which was moderated by INSME Secretary General, Giovanni Zazzerini.

The session was opened by Mr. Burton who briefly described China’s latest economic achievements, highlighting, particularly, the 2.3% GDP growth and the signing of international treaties and partnerships such as the Regional Comprehensive Economic Partnership (RECP) and the China-EU Investment Treaty. In line with the latest trends in the Chinese economy, Mr. Williams then focused in detail on China’s 14th 5-Year Plan launched in March 2021. He explained the government aims to accelerate China’s economic, technological, and global growth. Specifically, the plan envisages investments and innovations in 12 key development fields, including a spotlight on green development, security, national defence, innovation of science and technology, and rural revitalisation. The main goal is to transform China into an innovation powerhouse, thus speeding up technological progress in order to make the country an exporter of innovation and reducing imports for Chinese companies. Consequently, special attention is paid to the development of new sustainable and technologically advanced infrastructures, such as the development of new data centres, artificial intelligence, inner-city rail systems, 5G networks, ultra-high voltage, and finally new energy vehicle charging stations. The objective, ambitiously, is for China to reach an annual growth of 15% within the next five years, improving people’s lives and guaranteeing full economic development. Interestingly, Mr. Burton then described the adoption of the “dual circulation” strategy (conceived by Xi Jinping): while on the one hand China seeks to boost domestic production and capacity, it does so without closing itself off, thus reaching out to other countries, some examples are the RCDP programme and EU-China CAI agreement.

The two speakers then shifted the focus to the role of incubators in the Chinese entrepreneurial system. In this regard, according to Mr. Williams, in 2019 Chinese technology business incubators invested about 11 billion USD in R&D, receiving financial support from Chinese government. The activity of incubators has resulted in the rise and within the Chinese ecosystem. For example, out of 650 new unicorns registered worldwide in April 2021, 162 are Chinese. In this context, while highlighting some of the key factors in China’s entrepreneurial and economic development, Mr. Burton focused specifically on the importance of the development the Greater Bay Area, which has now become a global innovation and technology development hub. The Area, located along the bay between the two autonomous regions of Hong Kong and Macau, extending also into Guangzhou and Shenzhen of the Guangdong province, plays an important role for Beijing in the fields of innovation, technology, robotics and biotechnology development. According to Mr. Burton, it has nearly 72 million people and contributes to 37% of exports and to 12% of the Chinese GDP and is home to the headquarters and production facilities of major IT, technology and communications companies such as Huawei, DJI, Tencent, Foxconn and ZTE. Moreover, the Shenzhen metropolitan province alone has more than 536 start-ups, 20 of which are considered unicorns, and a GDP per capita of $31.887. Beijing aims to promote the modernisation of the area, in order to encourage new investments and to boost R&D of new technologies, so as to compete in the near future with Silicon Valley.

For more information, you can access the speaker’s presentation here